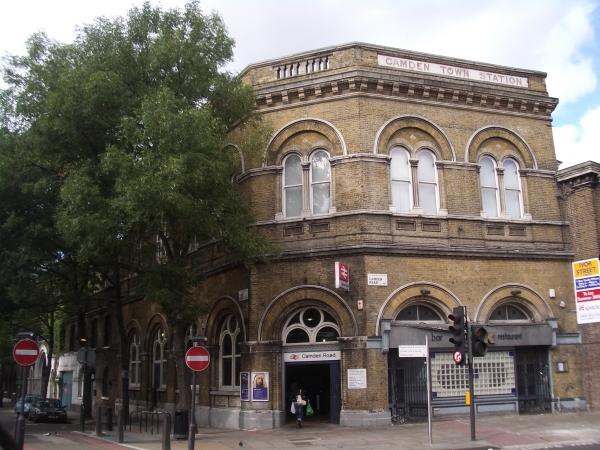 Camden Road railway station is in the London Borough of Camden in north London. The station and all trains serving it are operated by London Overground. It is on the North London Line and in Travelcard Zone 2.

This is the second station of this name and is located at the corner of Royal College Street and Camden Road. Opened as "Camden Town" by the North London Railway on 8 December 1870, it was renamed "Camden Road" on 25 September 1950 to avoid confusion with the London Underground Northern line Camden Town which had opened in 1907. Thus, between 1907 and 1950, there were two stations called 'Camden Town'.

The present 'Camden Town' London Underground station is 450 metres to the southwest of this station. However, the accompanying 2008 photograph shows the original name ("Camden Town Station") still displayed on the parapet of the station building of what is now 'Camden Road' station. It is one of the few railway stations in England in which there is a police station. The first Camden Road station was about 500 metres further east and was operated by the Midland Railway from 1868 until it was closed in 1916.

In addition to the frequent local passenger service, the station is a busy location for freight traffic due to its proximity to the junctions linking the North London Line to both the West Coast Main Line at Camden Junction (via the now closed station at Primrose Hill) and the East Coast Main Line at Copenhagen Junction. The former is particularly well used by container trains from the deep water port at Felixstowe to various terminals in the Midlands & North West of England; it also carried a passenger service (between Watford Junction and Broad Street/Liverpool Street) until 1992.

Things near Camden Road Railway Station at other websites