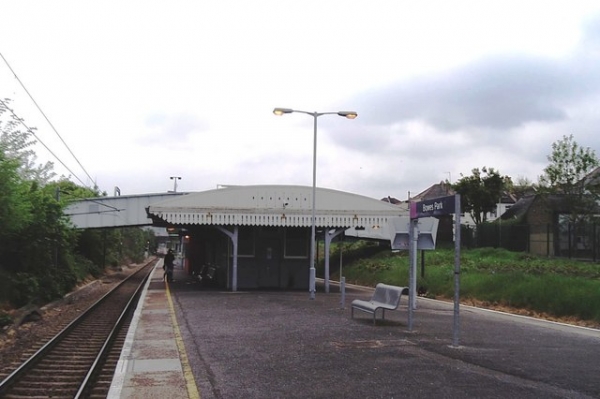 Bowes Park railway station is in the London Borough of Haringey in north London, and is on the boundary of Travelcard Zone 3 and Travelcard Zone 4. It is 5 miles 55 chains (9.15 km) down the line from London King's Cross. The station and all trains serving it are operated by Great Northern, on the Hertford Loop Line. It was first opened by the GNR in 1880, some nine years after the Loop Line itself was completed.

The station is a short walk from Bounds Green Underground station on the Piccadilly line, with which it is a valid out-of-station interchange. It has an unusual location in that it is situated between two quiet residential cul-de-sacs and is accessed from a footbridge over the railway line which divides those streets.

Bowes Park is the only station on the entire Hertford Loop with an island platform.

To the north of the station is a single siding in between the two running tracks which is occasionally used to turn around East Coast InterCity 225 and 125 trains heading for Bounds Green Depot just north of Alexandra Palace. A connection to the now disused GER Palace Gates Line whose terminus, Palace Gates (Wood Green), lay just to the south, was made in 1929.

Things near Bowes Park Railway Station at other websites