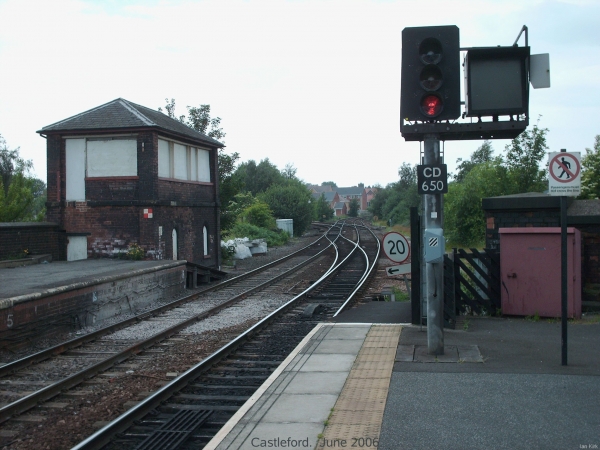 Although originally built as a through station, regular passenger services beyond Castleford towards York were discontinued in January 1970. Today, all trains calling at the station reverse here, arriving and departing from the former northbound platform 1. Platform 2 is currently out of use and inaccessible, though it was brought back into use temporarily during the Leeds First project in 2002 when Transpennine services between York and Huddersfield were diverted to avoid engineering work in Leeds, routed via Church Fenton, Castleford and Wakefield Kirkgate. It may also be brought back into use on a more permanent basis to help accommodate extra peak hour services if Network Rail proceed with plans mooted in the recent Yorkshire & Humberside RUS.

The route from Church Fenton continues to be used for freight traffic, empty stock transfers, special trains and such engineering and other out-of-course diversions as required as well as a small number of passenger trains that are booked this way for route retention (mainly overnight Trans-Pennine services plus, on a Saturday, the first Cross Country from York).

West Yorkshire Metro has been developing plans to relocate Castleford bus station to a new site next to the railway station, and to create a fully integrated and staffed transport interchange. In October 2014, work on the new £6 million bus station was started and it opened to the public in February 2016.

Things near Castleford Railway Station at other websites