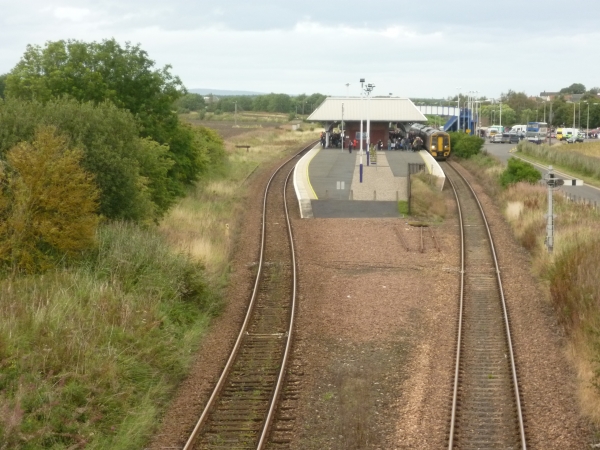 Leuchars railway station (pronounced 'Loo-khars' listen ) serves the towns of Leuchars and St Andrews in Fife, Scotland. The station is the last northbound stop before Dundee.

The station was built as Leuchars Junction station for the route over the Tay Bridge to Dundee, the previous Leuchars station being on the line to Tayport.

There are buses and taxis available to transfer passengers to nearby St. Andrews, which does not have its own railway station; integrated tickets with the destination "St Andrews Bus" are sold.

The station is located near the active airbase RAF Leuchars.

Station operator Abellio ScotRail announced plans during March 2008 to erect a wind turbine to meet the electricity requirements of the station, and hope to generate a small surplus of electricity which they can sell back to the National Grid. Leuchars will be the first station to be powered this way, and if the project, which was funded by Transport Scotland proves successful, it may be rolled out across other stations.

Things near Leuchars (for St. Andrews) Railway Station at other websites