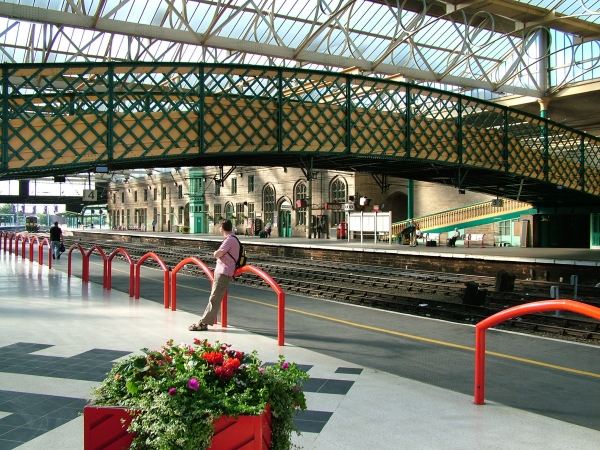 Carlisle railway station, or Carlisle Citadel, is a Grade II* listed railway station serving the city of Carlisle, Cumbria, England. It is on the West Coast Main Line, 102 miles (164 km) south east of Glasgow Central, and 299 miles (481 km) north north west of London Euston. It is the northern terminus of the Settle and Carlisle Line, a continuation of the Midland Main Line from Leeds, Sheffield and London St Pancras. It is so named because it is adjacent to Carlisle Citadel, a former medieval fortress. The station is owned by Network Rail.

In September 1847, the first services departed the station, even though construction was not completed until the following year. It was built in a neo-Tudor style to the designs of English architect William Tite. Carlisle Station was one of a number of stations in the city, the others were Crown Street and London Road, but it was the dominant station by 1851. The other stations had their passenger services redirected to it and were closed. Between 1875 and 1876, the station was expanded to accommodate the lines of the Midland Railway which was the seventh railway company to use it.

The Beeching cuts of the 1960s affected Carlisle, particularly the closure of the former North British Railway lines to Silloth, on 7 September 1964, and the Waverley Line to Edinburgh via Galashiels on 6 January 1969. The closure programme claimed neighbouring lines, including the Castle Douglas and Dumfries Railway and Portpatrick Railway (the "Port Road") in 1965, resulting in a significant mileage increase via the Glasgow South Western Line & Ayr to reach Stranraer Harbour, and ferries to Northern Ireland. The station layout has undergone few changes other than the singling of the ex-NER Tyne Valley route to London Road Junction in the 1972–73 re-signalling scheme, which was associated with the electrification of the West Coast Main Line (WCML). Renovations to the platforms and glass roof were performed between 2015 and 2018.

Things near Carlisle Railway Station at other websites