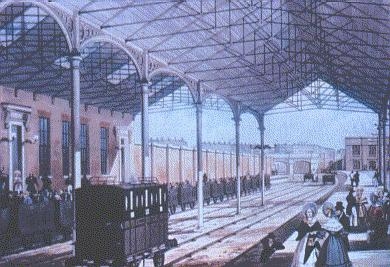 Euston is the southern terminus of the West Coast Main Line, the busiest intercity passenger route in Britain and the main gateway from London to the West Midlands, the North West, North Wales and parts of Scotland. Virgin Trains provides high-speed intercity services to these regions. Its most important long-distance destinations are Birmingham, Liverpool, Manchester and Glasgow.

Euston is also the London terminus for London Midland trains providing local commuter and regional services via the WCML from London to Hertfordshire, Buckinghamshire, Bedfordshire, Northamptonshire and Warwickshire as well as long-distance services to the West Midlands county, Staffordshire and Cheshire. Euston is also the terminus for suburban services on the Watford DC Line operated by London Overground.

It is connected to Euston tube station and near to Euston Square tube station on the London Underground. It is a short walk from King's Cross Station, the southern terminus of the East Coast Main Line, and St Pancras International Station for the Midland Main Line and for Eurostar to France and Belgium. These stations are all in Travelcard Zone 1.

Euston is the gateway to Ireland via Holyhead and ferry to Dublin Port where the previous route was replaced in September 2014 to Dún Laoghaire, for Dublin. Until the 1960s the station was a terminus of the most-frequented London to Belfast route, via Carlisle, the former Castle Douglas and Dumfries Railway and the Portpatrick Railway to Stranraer which was replaced by the longer Glasgow South Western Line via Ayr.

Things near London Euston Railway Station at other websites