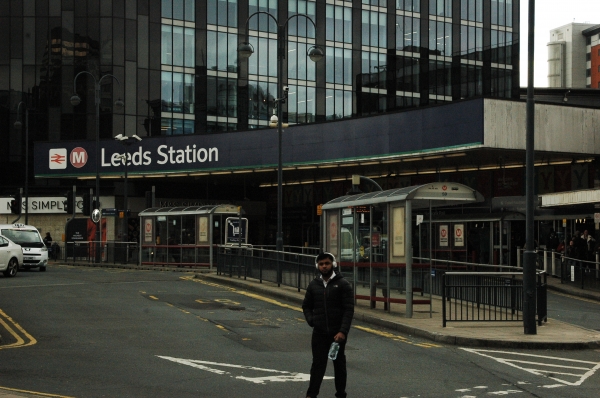 Leeds railway station (also known as Leeds City railway station) is the mainline railway station serving the city centre of Leeds in West Yorkshire, England. It is the third-busiest railway station in the UK outside London (as of 2016). It is located on New Station Street to the south of City Square, at the bottom of Park Row, behind the landmark Queens Hotel. It is one of 19 stations managed by Network Rail.Leeds is an important hub on the British rail network. The station is the terminus of the Leeds branch of the East Coast Main Line (on which London North Eastern Railway provides high speed inter-city services to London every half hour from the station) and is an important stop on the Cross Country Route between Scotland, the Midlands and South West England connecting to major cities such as Birmingham, Glasgow, Edinburgh, Derby, Nottingham, Reading, Bristol, Exeter, Plymouth and Penzance. There are also regular inter-city services to major destinations throughout Northern England including Manchester, Liverpool, Newcastle and Sheffield. It is also the terminus for trains running on the scenic Settle to Carlisle Line. Future expansion will link the station to the proposed High Speed 2 (HS2) network.

Leeds is a major hub for local and regional destinations across Yorkshire such as to York, Scarborough, Hull, Doncaster and Sheffield. The station lies at the heart of the Metro commuter network for West Yorkshire providing services to Bradford, Wakefield, Dewsbury, Huddersfield and Halifax.

Things near Leeds Railway Station at other websites